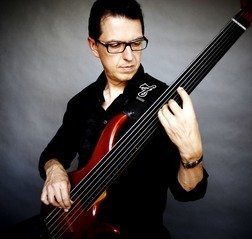 Canadian bassist Alain Caron’s musical career began at the early age of 11 when he won an amateur contest, he soon joined some top 40 bands performing American, south-American and French standards. AT the age of 14 he discovered the music which would become his life’s passion - jazz. Opportunity knocked in 1977 when he met the Michel Cusson Group. they emerged in the early 1980s with super fusion group UZEB. To this day, Alain has released more than 20 records, solo or with  UZEB and in collaboration or as a guest artist on more than 25 recordings. Winners of numerous prices including, 10 Felix, 1 Gemeaux, 1 Oscar-Peterson award. Alain Caron's group had played one concert at the Reading 3 venue in Tel Aviv on March 3, 2012.