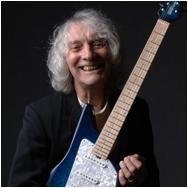 "The greatest guitarist in the world" according to Eric Clapton, British by birth and upbringing, Albert Lee spent the mid-'60s as a top R&B guitarist, but in the 1970s became one of the top rockabilly guitarists in the world, and no slouch in country music either. In England he's a been household name, and in Nashville and Los Angeles he's been one of the most in-demand session guitarists there is, playing behind the Everly Brothers or alongside Eric Clapton, Joe Cocker and many others. Lee has received many awards, winning five consecutive times Guitar Player magazine's "Best Country Guitarist" and a two Grammy Awards for Best Country Instrumental Performance. We are very pleased to have him in Israel at the Reading 3 venue, October 10th 2016.