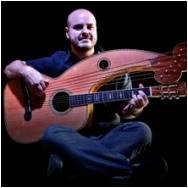 Born April 4, 1979 in Topeka, Kansas, Andy Mckee is an American fingerstyle guitar player who has released solo albums and been the subject of YouTube videos. In late 2006, a live performance of his signature song "Drifting" became a Featured Video on YouTube and MySpace, achieving over 55 million views on the former. McKee began listening to metal, such as Dream Theater, at an early age. He described on Woodsongs how he was a "metal freak" during childhood, even performing a Metallica song in his high school talent show. It was not until he saw Preston Reed that his influences began to shift towards acoustic songwriters such as Don Ross and Michael Hedges. Both walks of music continue to influence him, though he has stuck with acoustic music in his professional life until now.