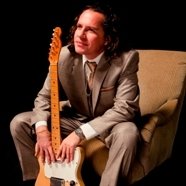 Born and raised in Israel, Guy King first arrived in Memphis Tennessee at the age of 16. After a short stay in Memphis and a stint in New Orleans, Guy headed north to Chicago in pursuit of greater things and a musical career. Since arriving in Chicago, he has performed at the city’s top venues, such as: Buddy Guy’s Legends, Andy’s Jazz Club, House of Blues, The Green Mill, S.P.A.C.E., B.L.U.E.S., Blue Chicago, Rosa’s Lounge and others Playing 250-300 shows a year. Some of his appearances include the Montreal Jazz Festival, Chicago Blues Festival, King Biscuit Festival, Blues on the Fox, Paramount Theatre, Basel Blues Festival (Switzerland) and many more.

Guy played two dates in Israel: December 13th, 2013 at the Rappaport hall in Haifa & December 14th at the Zappa club in Herzliya.