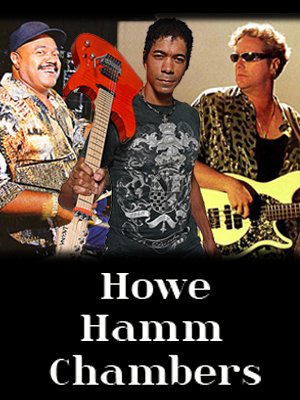 Greg Howe's self-titled debut album was released in 1988 during the popular shred era and became his highest-selling album. Guitar World magazine ranked it tenth in the all-time list of shred albums. Greg’s second solo album "Introspection" set the tone for a series of eight fresh forays in to the mosaic of fusion, rock, funk, blues, and jazz.
Stu Hamm has performed and recorded with Steve Vai, Frank Gambale, Joe Satriani and many other well-respected guitarists. Subsequent recordings with Satriani along with the release of his own solo recordings solidified his reputation as a bassist and performer.
Dennis Chambers began drumming at the age of 4 and was gigging in Baltimore-area nightclubs by the age of 6. In the early 90s he joined the John Scofield band. Since then he has played with most of the major figures in jazz fusion music.
The fusion super-grope of Howe, Hamm and Chambers preformed on August 6th, 2011 at the Reading 3 venue in Tel Aviv.