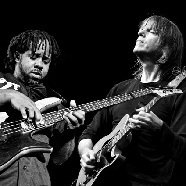 In a career that spans three decades and a discography that includes more than a dozen eclectic and innovative recordings, six-time GRAMMY nominee Mike Stern has established himself as one of the premier jazz and jazz-fusion guitarists and composers of his generation. He's also knowen as the guitar player of Blood, Sweat & Tears and Miles Davis. Together with Victor Wooten, who has won most every major award given to a bass guitarist, including five GRAMMY's as a member of the super group Béla Fleck & The Flecktones, they've formed the MIKE STERN / VICTOR WOOTEN BAND featuring Bob Franceschini on Sax & Derico Watson on Drums. They played one concert at the Shuni Fortress in Binyamina on July 12th 2013.