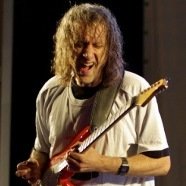 Born in 1954, Scott Henderson grew up in an era where blues-rock was at it's peak. His formative musical years took place in South Florida where he played the clubs with all kinds of bands playing everything from Led Zepplin to James Brown. Even though Henderson claims to be more of a blues-rock player, it was the influence of jazz that led him to the style of playing and composing that he is now famous for.
In 1991, he was named by Guitar World as the #1 Jazz Guitarist, and in January 1992, he was named #1 Jazz Guitarist in Guitar Player's Annual Reader's Poll. Scott Henderson's trio featuring Dennis Chambers on drums & Jeff Berlin on bass played at the Reading 3 venue in Tel Aviv on October 29th 2011.