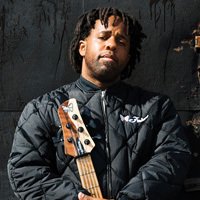 Known for his solo recordings and tours, and as a member of the Grammy winning super group, Béla Fleck & The Flecktones, Victor Wooten has won most every major award given to a bass guitarist. He was voted Bassist of the year by Bass Player Magazine three times in a row and is the first person to have won the award more than once.

Victor’s uncanny skills and growing popularity lead to recordings and performances with artists such as Marcus Miller, Branford Marsalis, Mike Stern, Bruce Hornsby, Chick Corea, Dave Matthews, Prince, Keb Mo and the Jaco Pastorius Word Of Mouth Big Band. Victor came to Israel with drummer JD Blair for one concert at the Reading 3 venue in Tel-Aviv on May 16th, 2011.